EXCLUSIVE: Republican Rep. Mike Waltz on Monday introduced a resolution urging the U.S. to boycott the 2022 Winter Olympic Games in Beijing if they are not moved, saying the U.S. “cannot in good conscience” have American athletes celebrating an event hosted by “a brutal dictatorship” and warning that China’s Communist Party would be “emboldened by the legitimacy conferred by the Olympics.”

The resolution alleges “unprecedented steps” by the Chinese Communist Party in the last year to “extend their repressive policies through censorship, intimidation and the detention of individuals and groups for exercising their fundamental human rights, especially in the Xinjiang Uyghur Autonomous Region and Hong Kong;” mass internment camps, forced labor, and efforts to intensify campaigns that bring religion in China “under closer official control,” and to conceal the novel coronavirus.

The resolution states that “the Olympic Games is a celebration of international culture, a festival of humanity and is intended to be independent of political, ideological and diplomatic disagreements.”

“However, hosting the 2022 Winter Olympics Games in the PRC, where organized atrocities in the XUAR are ongoing; where the freedoms of Hong Kong‘s citizens are being trampled; where the fundamental right to worship is brutally persecuted; and in the wake of the ongoing global devastation from COVID-19; would be immoral, unethical and wrong,” the resolution states. 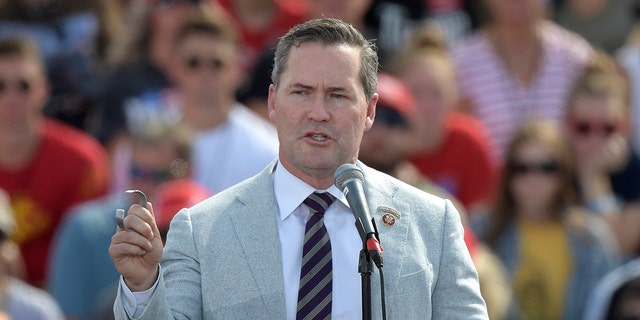 “Think about what we’ve gone through in the last year as a country – what it is doing to our children, to our elderly, to our families in terms of the coronavirus,” Waltz, R-Fla., told Fox News, saying it is “indisputable at this point that the Chinese Communist Party covered” the virus up.

“So you have that, on top of, what is increasingly coming to light a genocide – forced labor, internment,” Waltz continued. “To see the American flag and to see American athletes in Beijing celebrating what is the worst of the worst authoritarian regimes right now – I can’t imagine it.”

He added: “It makes me sick to think of the Olympics – in just 11 months – being celebrated in Beijing after all of that.”

Waltz also pointed to more than 80 global international brands making money on “slave labor in western China,” and said “some of them will be making money on the Olympic Games.”

“Social justice applies only in the United States but not in international relations?” Waltz said.

Waltz told Fox News that he hopes that when the Biden administration “looks at these things entirely,” including Chinese religious prosecution and their crackdown on “the basic liberty of free speech,” that they will “agree we cannot, in good conscience, have the American flag with our athletes celebrating, by all definitions in the book, a brutal dictatorship.”

“I certainly hope they do,” Waltz said. “And if they look at it objectively I think they will.”

President Biden, last week, spoke to Chinese President Xi Jinping for the first time since taking office, and outlined his “core concerns” with China’s “aggressive activities and abuses,” according to senior administration officials.

And a number of Biden administration officials, including Secretary of State Tony Blinken and White House National Security Adviser Jake Sullivan, have signaled that China poses one of the greatest national security threats to the United States. Officials in the Trump administration also warned of China’s national security threat to the U.S. – with many agreeing it is a “bipartisan” issue.

“For me, whether it is the administration or the Democrats in the House – it is easy to talk the talk,” Waltz said. “This is walk the walk. If you care about basic freedoms – of speech, of press and of religion – then you’ll get on board.”

“If you follow history with these regimes, they are emboldened by the legitimacy conferred by the Olympics,” Waltz said.

A coalition of more than 180 human rights groups, some with ties to ethnic minorities that have suffered human rights abuses in China, earlier this month also called for a boycott of the Olympics. The coalition was composed of groups representing Tibetans, Uighurs, Inner Mongolians, residents of Hong Kong and others.

And Sen. Rick Scott, R-Fla., earlier the month also introduced a resolution in the Senate, calling on the International Olympic Committee to move the 2022 Winter Olympics out of China and rebid it to another country unless Beijing “immediately addresses its egregious and numerous violations of human rights.” Scott has been calling for the IOC to move the games from Beijing for over a year.

But Waltz added that his resolution is “focused on the CCP.”

“There is no issue with the amazing culture and long history of the Chinese people,” Waltz said. “They are being brutalized by the Chinese government.”

“We’re marching toward the winter games – it is right around the corner,” Waltz continued. “We’re going to bang this drum louder and louder.”

The Associated Press contributed to this report.

Biden issues statement on Trump impeachment acquittal: Substance of charge ’not in dispute’