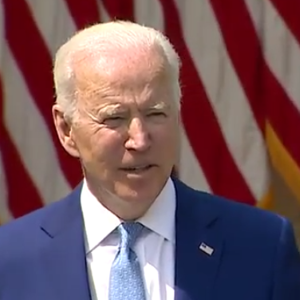 In outlining steps his administration would take on gun regulations, President Joe Biden misstated the facts on three existing policies:

Biden falsely said that “you can buy whatever you want” at a gun show with “no background check.” Federal firearm dealers at gun shows must run background checks. Private sales between nondealers are exempt from federal law.
He said states with “red flag laws” have seen reductions in suicides. But a review of research on whether the policies caused a reduction in total suicides found the evidence is inconclusive.
The president said gun manufacturers were “exempt” from being sued. They do have protections from civil lawsuits, but there are exceptions.

Biden made his remarks on April 8 from the White House Rose Garden, announcing actions he would take in an effort to reduce gun violence.

The president misstated the facts about background checks at gun shows.

Biden, April 8: Most people don’t know, you walk into a store and you buy a gun, you have a background check. But you go to a gun show, you can buy whatever you want and no background check.

Biden was referring to intrastate (same-state) private sales between nondealers, which are exempt from background checks under federal law, although such checks are required in some states, as explained in a 2019 report by the Congressional Research Service. Sixteen states and the District of Columbia require background checks for all gun sales, even those between private parties, according to the Giffords Center, a pro-gun-control group.

In addition to the federal and state background check requirements, federal law requires private dealers to obtain a firearms license and conduct background checks if they engage “in the business of dealing firearms,” which is “defined as repeatedly devoting time and attention to purchasing and reselling guns for monetary gain,” the Bureau of Alcohol, Tobacco, Firearms and Explosives said in a 2020 press release that announced three men had pleaded guilty to “unlicensed dealing” at gun shows in Texas.

“Hobbyists who sell weapons in one-off private transactions are not required to be licensed or to run background checks,” the ATF said in its release.

It is also worth noting that the CRS, in its 2019 report, said “private firearms sales at gun shows … did not appear to be a significant source of guns” for federal and state prisoners convicted of crimes involving firearms.

CRS said it reached that conclusion based on two surveys:

A 2015 survey that found about 22% of firearms transfers are “conducted privately between unlicensed persons.”
A 2016 survey that found 56% of prisoners convicted of crimes involving firearms “had either stolen the firearm (6%), found it at the scene of the crime (7%), or obtained it off the street or from the underground market (43%).” The survey found that 25% “had obtained the firearm from a family member or friend, or as a gift” and 7% from a licensed dealer.

Advocating so-called “red flag laws” that seek to temporarily remove firearms from people deemed to be a danger to themselves or others, Biden said states that have enacted such laws “have seen a reduction in the number of suicides in their states.”

There is some evidence of reduced suicides by firearm in states with red flag laws — also called extreme risk protection orders. But a RAND review of gun studies in 2020 concluded that while a study of the effect of Indiana’s red flag law is “suggestive” that it contributed to a drop in firearm suicides, there is “inconclusive evidence for the effect of extreme risk protection orders on total and firearm suicides.”

In his remarks, Biden called on Congress to pass a federal red flag law and ordered the Justice Department to publish model red flag legislation for states to pass.

As of Jan. 1, 2020, 16 states and the District of Columbia had some form of red flag laws, according to RAND. But there is wide disparity in how those states implement the law. For example, only law enforcement officials in some states can petition for an ERPO, while other states allow family members or medical professionals to do so. In addition, some states permit ex parte ERPOs, meaning that guns can be confiscated before a person has an opportunity to challenge the order in court. There is also wide disparity between states with regard to how long the orders last. All of those factors can influence how effective those laws are, researchers told us.

“These laws allow police or a family member to petition a court in their jurisdiction and say, ‘I want you to temporarily remove from the following people any firearm they may possess because they’re a danger and a crisis. They’re presenting a danger to themselves and to others.’ And the court makes a ruling,” Biden said. “To put this in perspective more than half of all suicides, for example, involve the use of a firearm. But when a gun is not available an attempt at suicide, the death rate drops precipitously. States that have red flag laws have seen a reduction in the number of suicides in their states.”

Research published in 2018 found that Indiana’s red flag law “was associated with a 7.5% reduction in firearm suicides in the ten years following its enactment.” There was a far smaller reduction in firearm suicides (1.6%) in the immediate years after Connecticut passed its own red flag law in 1999, though the reduction increased significantly (to 13.7%) after the state upped its enforcement of the law in the wake of the Virginia Tech mass shooting in 2007.

Aaron J. Kivisto, an associate professor of clinical psychology at the University of Indianapolis and co-author of the study, told us via email, “We have sufficient data from Indiana and Connecticut to make valid inferences, although there are now many states with red flag laws where we need time to measure their effects. In IN and CT, multiple research groups using distinct methodologies have found consistent support showing that red flag laws are associated with reductions in firearm suicide. In Indiana, where firearms are involved in over 60% of all suicides, this decrease in firearm suicide was linked to an overall decrease in suicide. In Connecticut, where firearms are involved in less than 50% of suicides, the decrease in firearm suicides appears to have been generally offset by other means, resulting in no significant changes in overall suicide rates.”

In its review of gun studies and the effect of state ERPO’s on suicide, RAND said the Kivisto study was “suggestive” of a reduction in firearm suicide rates in Indiana, but cautioned against generalizing national results based on the laws in just two states.

“Although the findings for Indiana’s law are suggestive, considering the strength of this evidence and potential issues of generalizability, we find inconclusive evidence for the effect of extreme risk protection orders on total and firearm suicides,” the RAND report states.

Andrew Morral, a RAND senior behavioral scientist who led the RAND project, told us Biden is correct that in some states, suicides went down after red flag laws were introduced.

“We, on the other hand, tried to assess whether they went down because of the law,” Morral said. “That we don’t think is yet proven in a way that even skeptics should have to agree is persuasive.”

Kivisto said that while his study showed no effect following Connecticut’s enactment of red flag laws in 1999, that was “unsurprising” because the law was not being enforced in “any meaningful way” until after the Virginia Tech shooting in 2007. The fact that the data “showed no effect of the law until meaningful numbers of firearms were seized supports the causal role of the law in reducing suicides,” he said.

Kivisto noted that other independent studies of the Indiana and Connecticut laws also concluded that more suicides by firearm would have occurred if not for the red flag laws.

“Regarding the strength of the evidence … there have been two independent studies of the laws in IN and CT that have used distinct methodologies and arrived at the same general conclusions,” Kivisto said. “Although perhaps a randomized trial would provide stronger evidence, such designs are simply not feasible. Observational evidence using rigorous statistical procedures is often the best evidence available in evaluating the effects of policy, and in this case such evidence supports red flag laws as a means of reducing firearm suicide.”

While further studies are warranted on the effect of new red flag laws passed in other states, he said, given the results of the studies to date, “I anticipate that these laws will be linked to reduced total suicide in most states, where firearms account for a majority of suicides. But there hasn’t been sufficient time to evaluate these questions in states that have adopted these laws more recently.”

The president said that “gun manufacturers” were “the only industry in America … that can’t be sued” because they’re “exempt.” Gun manufacturers do have protections from civil lawsuits but there are exceptions.

As we wrote last year, the Protection of Lawful Commerce in Arms Act of 2005, as described in a 2012 CRS report, “generally shields licensed manufacturers, dealers, and sellers of firearms or ammunition, as well as trade associations, from any civil action ‘resulting from the criminal or unlawful misuse’ of a firearm or ammunition.” But there are six exceptions.

They include cases in which a firearm seller was negligent, the transfer of a gun was made knowing it would be used to commit a crime, and manufacturers or sellers violated state or federal law in marketing or selling a gun.

For example, the Supreme Court declined to dismiss a 2014 lawsuit the families of victims of the 2012 Sandy Hook shooting filed against Remington Arms Co. for the way it marketed the assault-style rifle used to kill 26 people.

Editor’s note: FactCheck.org does not accept advertising. We rely on grants and individual donations from people like you. Please consider a donation. Credit card donations may be made through our “Donate” page. If you prefer to give by check, send to: FactCheck.org, Annenberg Public Policy Center, 202 S. 36th St., Philadelphia, PA 19104.

New Amy Winehouse film ’10 Years On’ to air on BBC