Over the past 14 months, cheap flight deals have been plentiful, as air travel bottomed out worldwide. With vaccination rates rising in wealthier nations, travel is starting to bounce back in some segements of the sector (we’re not out of the woods yet, though). Unfortunately, that means cheap flights are about to get a lot harder to find.

Over the course of the pandemic, airlines enacted free change policies on flights and full refunds with no fees. They also lowered prices to the absolute rock bottom break even point. Well folks… that era is over. Most change fees are back. Zero fee refunds are not a given anymore (though some airlines have adopted a new model with flexibility built in). And flight prices are pretty much as high as they ever were.

Airlines seem to be racing to recoup 14 months of pretty drastic losses. Which isn’t great for anyone looking for a ripping price on plane tickets.

That said, it’s not impossible to find a good value on flights as we look ahead to summer travel. It just takes some hustle. You have to set alerts. And you have to be willing to act almost immediately or risk missing the deal completely.

To that end, we’ve compiled a list of (mostly) domestic flight deals for the coming summer, starting with Memorial Day weekend. Some of these call-outs are specific sales; others are ways to find cheap flights in general. We also took each of these deals to the payment page to find out what the bottom line prices actually are, instead of just the flashy advertised “sale” price.

Related: The Best Travel Podcasts For Anyone Ready To Hit The Road Again

This deal would be great if it was for one person, but it’s exclusively for two (meaning the price is “per person” but the room is shared).

If you book a hotel, you can get a free flight with that price (or at least a discount on the flight). The price includes all taxes and fees associated with the flight and a stay at your destination for two people (in one room).

So looking at a July 4th weekend trip from Los Angeles (LAX) to Austin, the advertised price is $456 per person. That includes two roundtrip tickets (Alaskan/United), a suite with a king bed and free breakfast for three nights (Homewood Suites by Hilton), plus taxes and fees. The final price comes to $911.93. The flights come with one carry-on included in that price.

Naturally, this price will vary depending on the weekend you choose to travel and the route you’re flying.

This isn’t so much a deal as it’s a way to find one. Kayak Explore allows you to set your home airport and time frame. Then, prices will pop up all over the country and world. From there, you can find a destination that’s in your price range.

Let’s use a flight deal that pops up in July from Portland to Las Vegas advertised as “from $128.” Once you click through, you’re led to “Flight Network” where you can book a “Flexible” flight (meaning that you can still change it) for $148.17 roundtrip.

After going through the booking, the price skyrockets to $293.85. The bulk of that is for a carry-on there and back (around $105) plus various small fees. But that’s still without a checked bag or pre-booking a seat — all of a sudden the deal looks less exciting. 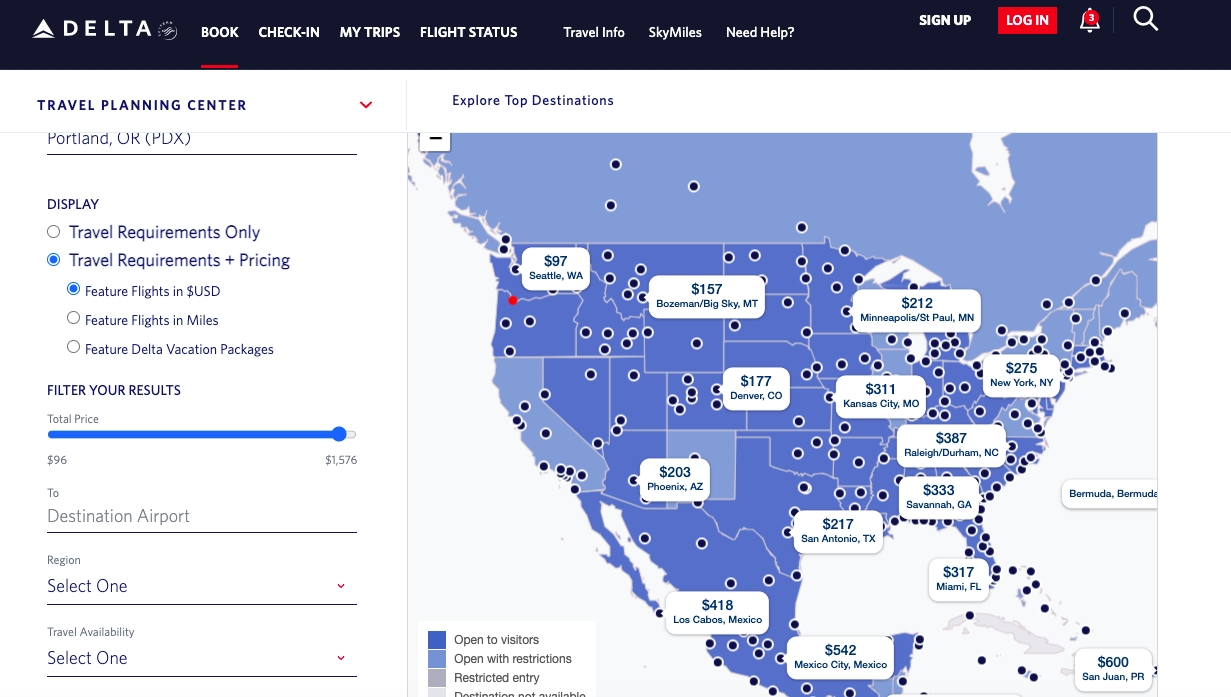 Like Kayak above, this is more a service for finding deals in an easy and efficient way. Basically, you set your home airport and time frame, and see where is in your budget with Delta and their affiliate airlines and go from there.

A Delta roundtrip flight from Portland to Nashville comes up as “Starting At: $295” in early June. When you click through, the final price comes up to $374.40 with one carry-on. The flight is changeable (without a fee) but not refundable. 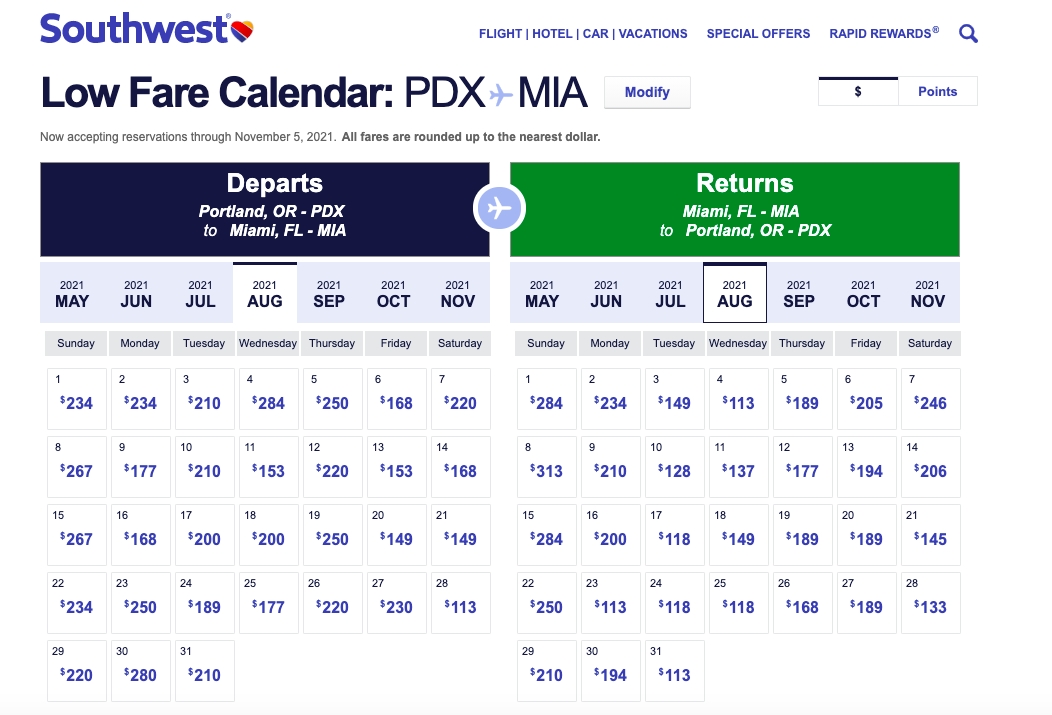 Southwest is running massive flight sales until May 20th, 2021. The best way to find these deals is to use their “Low Fare Calendar” to suss out where it’s actually cheap to fly to over the summer months.

The best part of this deal is that baggage fees are being waived, meaning you can get two free checked bags plus a carry-on for $0. That’s a real steal right now.

A flight from Boston to Miami during the second week of June comes up as $88 each way. When you click through on the prices, the final price is $175.96. That’s with the two free checked bags, a carry-on, and no change fees (it’s only refundable up to ten days before departure). 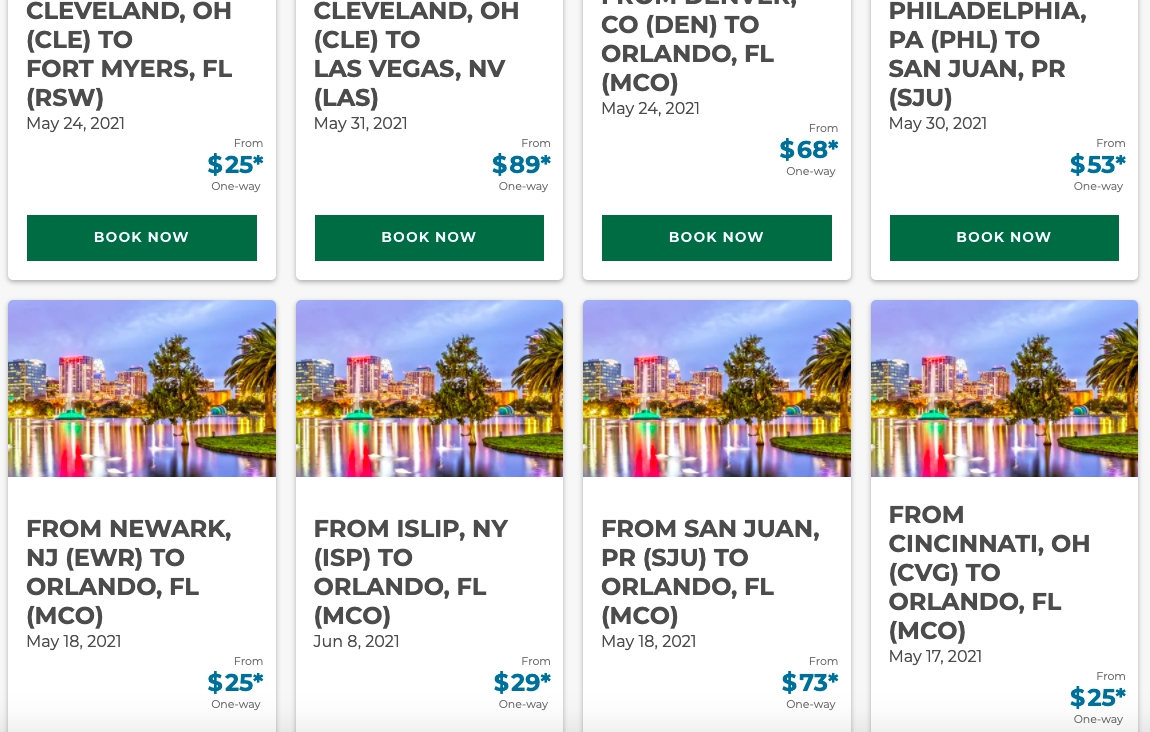 Fly Frontier is always running deals for one-way and roundtrip flights around the U.S. Basically, you should set alerts for destinations or simply check in periodically.

Looking at a one-way flight from Philadelphia to Orlando on May 30th, you are drawn in with a “$19 one-way” flight price. To get that price, you’ll need to join Frontier’s points program for $59.99 per year — and even then that’s a base price, not a final one. Otherwise, the price is $25 for a one-way ticket initially.

When you click through, you’ll need to pay an additional $39 for a carry-on (you’re allowed a small backpack for free). With no seat, insurance, or refundability, the final price is $63.40 for a one-way ticket from Philly to Florida. If you want all the perks of seats, pre-boarding, and checked bags (including changeability and refunds), the price ends up at $118.40 each way.

JetBlue is running deals for Memorial Day weekend. Their deals include a hotel and flight, usually for two. There’s an easy landing page with plenty of options with a focus on the hotel as the destination.

Looking at a deal over Memorial Day weekend going from New York (JFK) to the Biltmore in Miami, you can get an advertised price of $478.15 per person (when booked for two). Clicking through, you end up at a final price of $956.29 in a superior room with a king bed and two round-trip non-stop flights.

You’ll need to pay an additional $64.56 if you want travel insurance, which will cover cancellations and changes if need be. 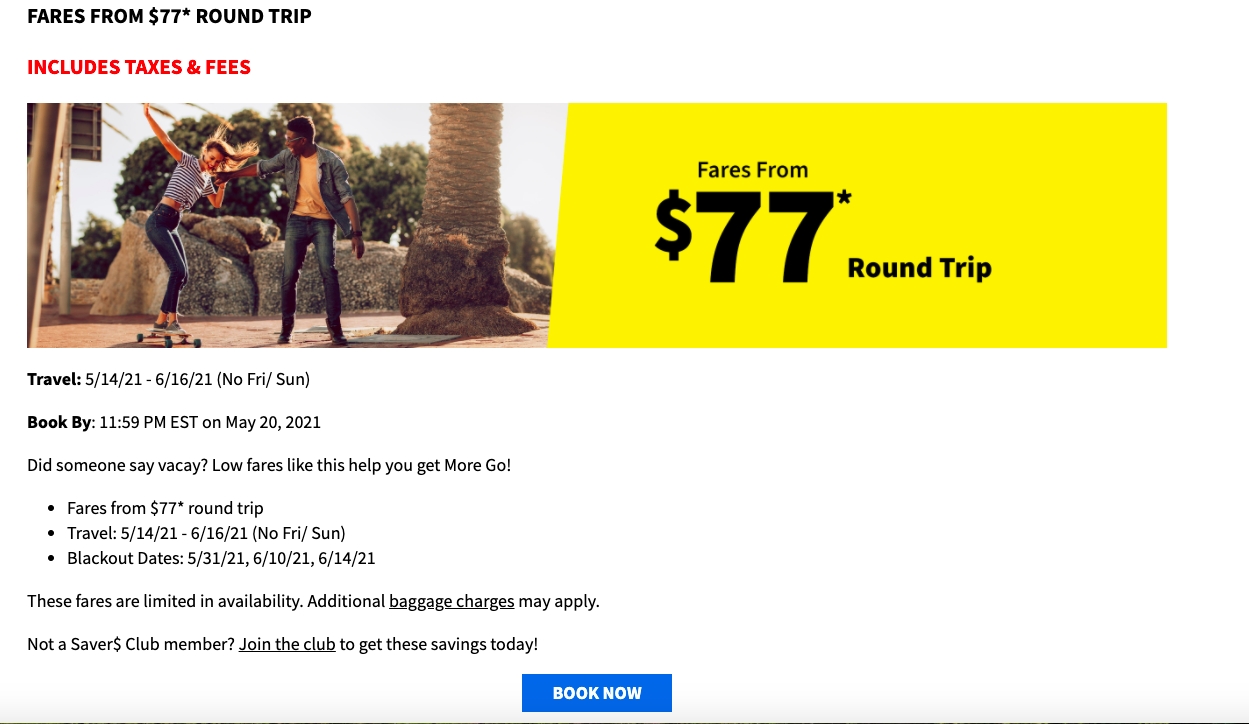 Spirit is always running deals, too. Their current sale ends on May 16th and covers flights between May 16th and June 16th. If you’re a member of Spirit’s $aver Club, you can score one-way base fares starting at $25 ($59.95 to sign up and $69.95 per year). For non-members, that price will start at $40 one-way for a base fare.

Looking at flights in mid-June from Detroit to Austin, you’re met with a base price of $113.54 for a roundtrip, nonstop flight. That price stays the same and includes one small carry-on (backpack size) and that’s it. The price increases if you want travel insurance, a full carry-on or checked bag, or a seat assignment in advance.

Google Travel Explore has a slightly better user experience that allows you to search flight deals from your home airport through various timeframes. Their map is a little easier to use, and the best deals are lined up under your details on the right.

A roundtrip deal from Burbank to Bozeman (Yellowstone) is advertised at $191 on Alaskan. Clicking through, that price holds at $191 total with one standard carry-on, no seat, no checked bag, and no changes possible (or refunds). If you want all of that (still minus a checked bag), the price goes up to $251 total for the same roundtrip. 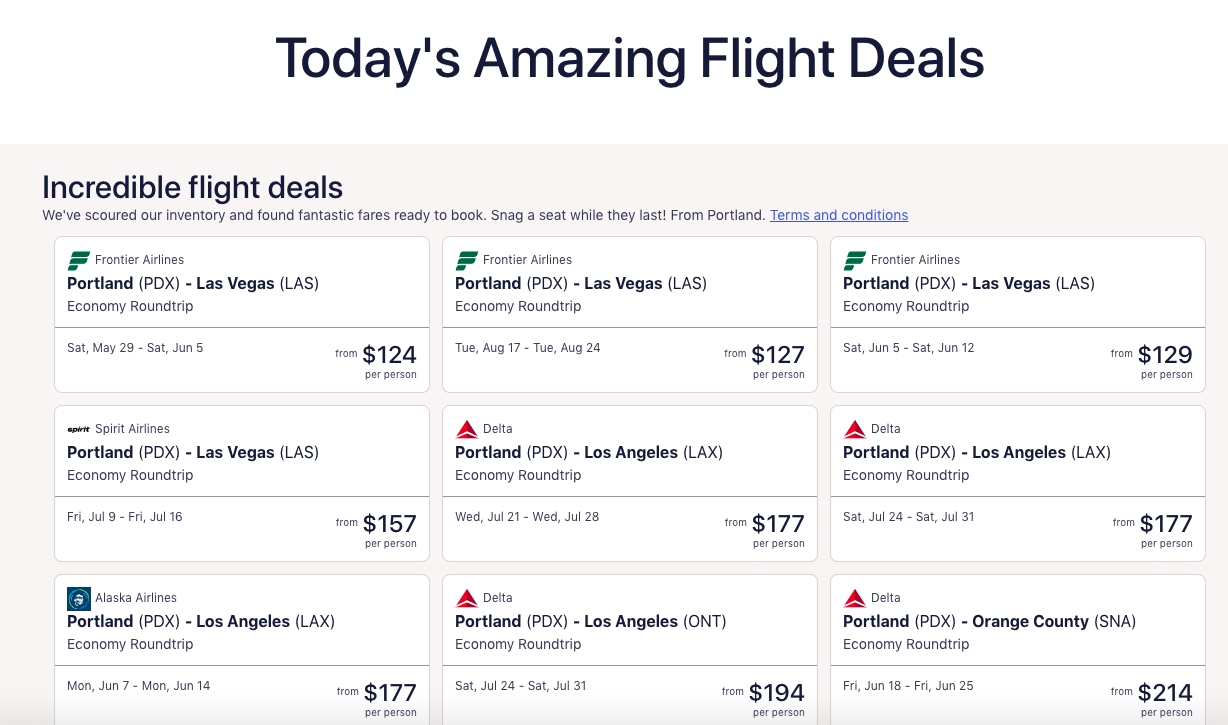 Expedia has a cool landing page where they collate their “Today’s Amazing Flight Deals.” Depending on your airport, roundtrip deals will line up with choices all over the country and the world.

Looking at a Delta deal at the end of summer (early September) for a Portland to Honolulu flight, there’s a flight for $356 that stays pretty close to that price. Taking it all the way to the payment page, the final price is $360.61. That’s for a basic economy flight with one standard carry-on, no change or refunds, and no seat assingment. 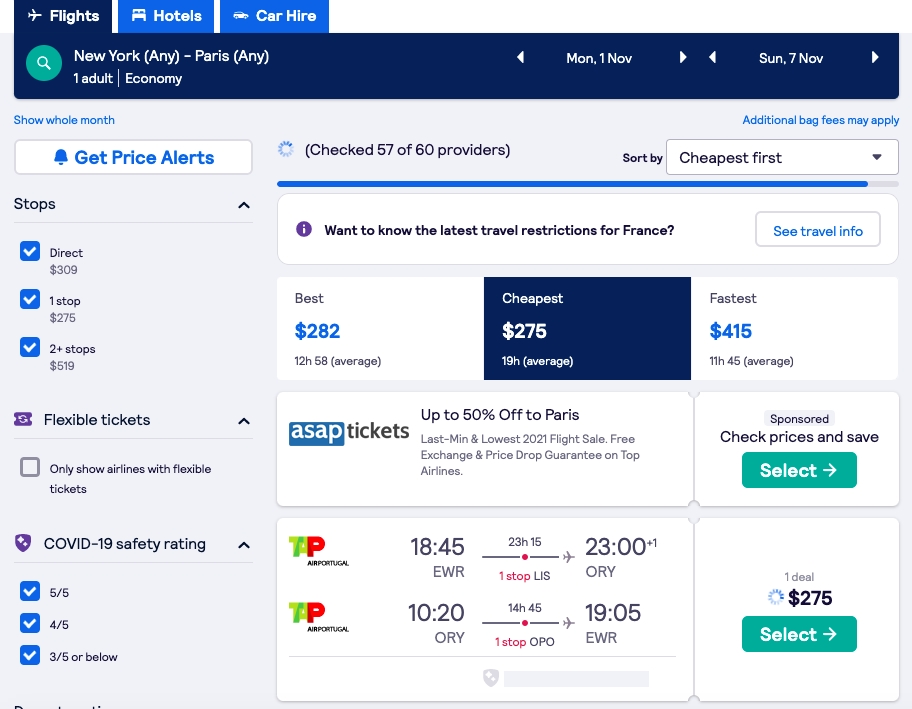 Secret Flying still lists hard-to-find flight and hotel deals that you’d be really hard-pressed to find yourself. The best practice for following the latest deals is to set up alerts with Secret Flying or follow them on social media.

A flight deal that popped today for a roundtrip from New York to Paris between September 2021 and March 2022 is pretty hard to beat. The flight is on TAP Air Portugal and clocks in at $275 to $288 for a roundtrip.

Clicking through, the deal takes you to Skyscanner.com. And that takes you to a screen that says this ticket has sold out. That’s a very good lesson that you cannot hem and haw over whether to grab a ticket when you see it on Secret Flying.

As a Hotwire affiliate, Uproxx may receive a commission pursuant to certain items on this list.

Source: Where And How To Find Cheap Flight Deals For Summer 2021 Travel