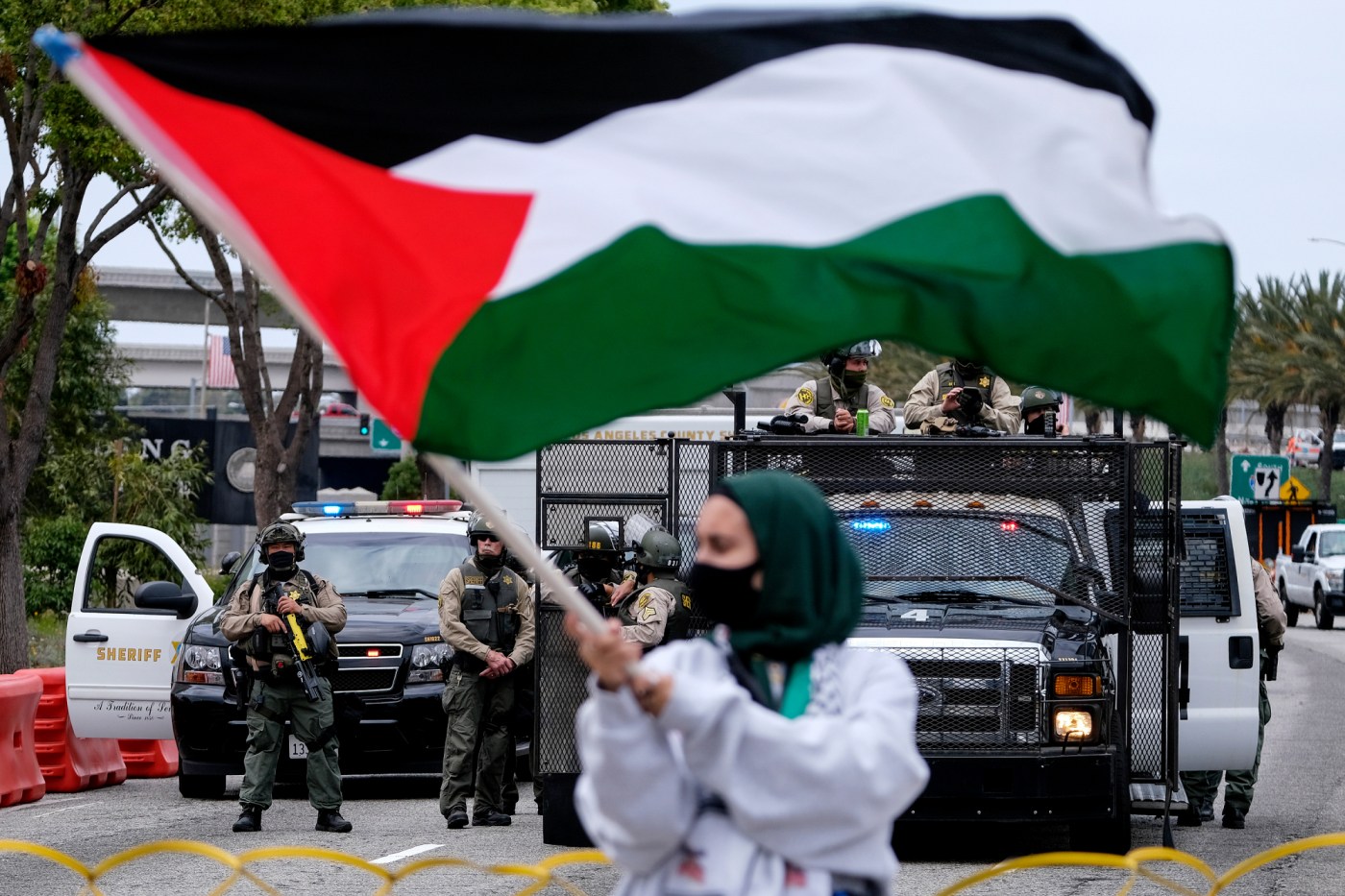 Several hundred people took to the streets in the Westwood area Saturday to demonstrate in support of Palestinians amid the ongoing violence between Israel and Hamas in Gaza as well as the forced displacement of Palestinians living in the Sheikh Jarrah of Jerusalem.

The demonstration was dubbed “Nakba 73: Resistance Until Liberation” and took place on Wilshire Boulevard at the Federal Building.

Organized by the Palestinian Youth Movement, it was one of several events scheduled around the United States on Saturday. Organizers said Nakba commemorates the date in 1948 when “over half of the Palestinian population was displaced from their homelands” for the establishment of Israel. Nakba translates literally to “catastrophe.”

Police reported no issues at the protest as of 2:15 p.m., according to Officer Norma Eisenman of the Los Angeles Police Department, but traffic was heavily affected in the area.

“The area of Wilshire Blvd near the 405 fwy is very congested due to large protest activity currently underway. Avoid the area if possible for the next few hours due to multiple street closures,” the LAPD tweeted at 2:24 p.m.

President Biden has given his support to Israel’s airstrikes, which they said were in retaliation to Hamas strikes on Israeli territory.

But Biden also voiced concern over civilian deaths and the protection of journalists in a call with Israeli Prime Minister Benjamin Netanyahu.

The deadliest fighting in recent years in Israel continued Saturday, with Israel launching airstrikes on Gaza and Hamas retaliating with missiles launched toward Tel Aviv.

Over the past five days Israeli strikes killed at least 145 Palestinians in Gaza — including 41 children and 23 women, the Associated Press reported Saturday. In Israel, military responses from Hamas killed eight, all but one of them civilians, including a 6-year-old child.

An Israeli airstrike on Saturday destroyed a building that houses offices for Al Jazeera and The Associated Press, among other media outlets.

Protesters on Saturday also rallied against the situation unfolding in the Sheikh Jarrah neighborhood in East Jerusalem where Jewish-Israeli settlers, emboldened by local court decisions, are forcing dozens of Palestinians from their homes after decades of living there.

The Israeli court decision and actions of settlers have drawn condemnation from the United Nations. Activists have called such displacement a continued effort of the Israeli government to ethnically cleanse the region of Palestinians, who they say already live in an apartheid state under military and police occupation.

The Associated Press and staff writer Jonah Valdez contributed to this report.

May Day marches, rallies held in L.A. on Saturday

Source: Hundreds in Los Angeles march in solidarity with Palestine amid airstrikes and displacement